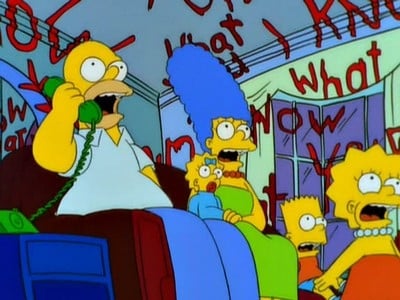 Subtitle for The Simpsons - Season 11, Episode 4: Treehouse of Horror X


Plot of The Simpsons - Season 11, Episode 4: Treehouse of Horror X:


In "I Know What You Diddily-Iddly-Did" the SImpsons fear they have killed Ned Flanders. "Desperately Xeeking Xena" satirizes superheroes of yore with "Stretch Dude" Bart and "Clobber Girl" Lisa. And "Life's A Glitch, Then You Die" depicts the upcoming horror of Y2K.