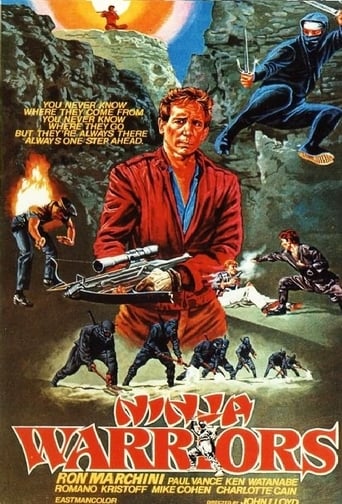 
Steve is a Ninja. He's been called in by the police to help them in their investigations. He's to work with Kevin, a police lieutentant. They are investigating the break-in at the Federal Research Institute, where despite heavy security, 7 Ninja warriors manage to steal a vital document. Well pleased with their night's work, they return to their master, Kurodo, who finds they only have a half of the information they need. The police capatain wants results. Kevin suspects that a Japanese Garden he visited once with Steve could be the headquarters of Kurodo and his Ninja's and goes in search of proof. He's caught spying and is tortured and killed. After the disappearance of Kevin, Steve opens his Ninja box. He breaks the seal of his Katana and starts the Mantra. He attacks the Japanese Garden, eliminates the Ninja warriors and after recovering the documents and blowing up the laboratory, finally meets Kurodo, there can only be one victor...

Write a review for Ninja Warriors